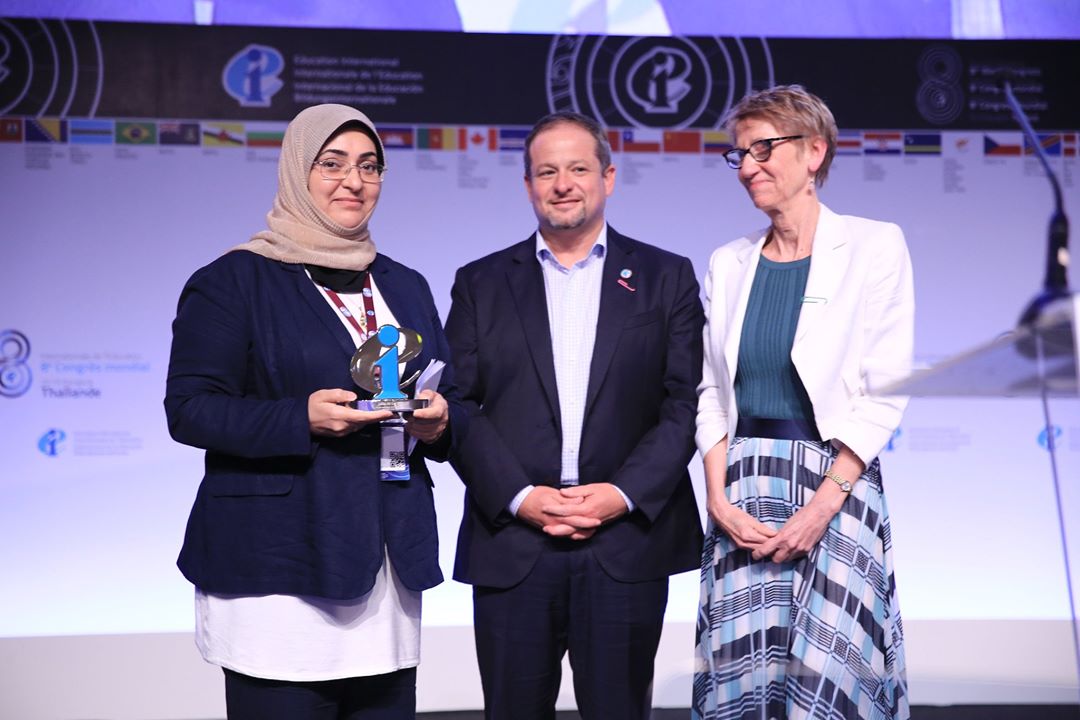 From the chronicles of EI 8th World Congress…

Traditionally, two nominees are given awards by the congress for contributions to the field of advocacy, democracy, social justice and equality.

She is a teacher, who has been fighting for teacher trade unions, democratic processes and equality for years. Despite intimidation and pressure, arrests and torture, she does not stop protecting girls' rights in Bahrain and the Middle East.

“For every award winner, there is a story behind the prize. There is someone, some events or challenges that put them at the forefront either by choice or by force. In my case, the story of Bahrain was the reason, the motive and the driving force; all that happened to me and to my colleagues pushed me to the forefront, and I took the stand. For me, it goes without saying that this award would not have been given in the first place if my colleagues, my students and my people were not suffering. If they were not looking at me as a source of hope to change, I would not have been here today.” She noted.

Riep, who is a PhD candidate and teaching assistant at the University of Alberta, Canada, has contributed to promoting quality public education through his ground-breaking research highlighting the increasing privatisation of education in several African and Asian countries.  Riep conducted field research that provided evidence for EI affiliate’s successful effort to convince the Ugandan government to act against a for-profit school chain operating illegally in Uganda.

Upon accepting the award, Riep said:

“The risks associated with the spread of commercialization and privatization in education are not isolated events only effecting certain parts of the world. It is a global phenomenon. And although the threats, challenges, and issues faced in Uganda, the Philippines and Ghana are different than they are in say the United States, Australia, or Canada—what is at stake is the same across the world: a public education system that works for the people, rather than profit-seeking elites.